It’s been a little over 3 months since I last posted on this blog.  Lots of CHANGES for me to adjust to… in addition it has taken me awhile to accept that what I put in motion, with my thoughts, actually transpired (thoughts become things as Mike Dooley and his TUT website teaches: http://www.tut.com).

Given all that, I’m poised to hand over the reins of Words and Watercolors to John Frisch, my printer and the owner of Leewood Press, soon.  From the first day I walked into the offices of Leewood Press, I felt a homecoming.  Leewood Press resides at 14o7 Indiana Street in San Francisco.  Indiana is the home of my youth, as I left at the tender age of 26 to move “out west”!  And John is like my big brother!

It was 4 years ago when I walked into Leewood looking for an offset printer.  At that time, I had realized that I was ready to jump from digital printing to offset.  The reason being is that it costs less to print offset than digital however you need to commit to a greater quantity each time you print with offset.  John and I talked about my requirements, which included inventory and fulfillment capabilities.  I had no idea that John would actually help me solve those problems in addition to becoming the offset printer. He did and I was ever so grateful. I used to refer to John as “my printer who was like a partner”.  He has in fact, become a partner in that he is purchasing Words and Watercolors and I will become “creative director”.

As many know who follow me on Facebook, last year was one of those difficult years one goes through during a lifetime.  I detailed those changes in my last post.  It was during those difficult times and lots of questioning that I realized that it might not be a bad idea to sell Words and Watercolors and “get a job” as my husband began suggesting last fall.  Like many a small business, Words and Watercolors paid for itself but I, as the owner, didn’t pay myself too much of an income.  The economy, in San Francisco, is crazy busy.  A 180 degree change from the economy in 2009 when I moved here from Seattle and couldn’t find a position in Sales of either corporate office furniture or commercial carpet, both of which I’d done.  Words and Watercolors was the result of a terrible economy…I couldn’t find a job so I created my own!  I had actually began a greeting card line in the mid 90’s called “Words and Watercolors”.  After 2 years, I gave it up as I was working my day job, married and had 2 young children.  But my passion for painting watercolors and pairing images with words has never changed.  I found Brush Dance and licensed my art to them for a number of years.  Brush Dance took my art and created EDC (everyday cards) and Holiday cards as well as a calendar called “In the Garden”.  It was perfect as it allowed me to work in corporate sales (my extroverted self) and earn good money as well as allow my art (my introverted self) an outlet to the world.  Until I moved to San Francisco.  I moved here after marrying Mark (had been a single Mom for 10 years but that’s another story!).  Like the circle of life, I’m back to working in corporate sales, as a territory manager for Global, http://www.globaltotaloffice.com and painting on the side.  It’s the best of both worlds, as I say.  The introverted and extraverted selves both have their respective “jobs” and I get paid!

Thanks to John and Robert, who he’s hired to be the Jack of all things, W&W will live on and continue to grow.  We’ve been planning lots of new products for introduction in 2016 and I’m thrilled that life has finally smoothed out.  Stay posted!  There will be changes to the website as well.  All IS good!! 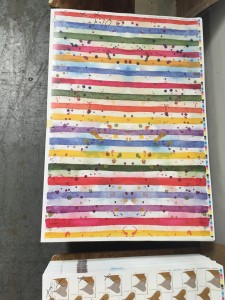 Ian is rooting for the Seahawks! 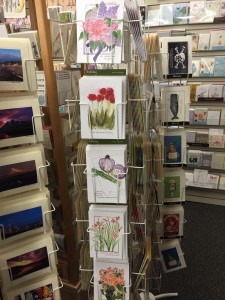 Words and Watercolors at NW Art and Frame in Seattle.

Happy Birthday celebration with my Aunt Mary, who shares my September 28th birthday. 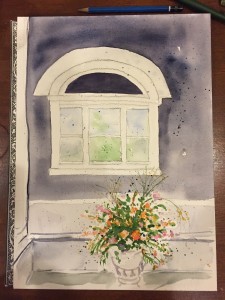 watercolor inspired by a home/garden in Indiana when visiting in September. 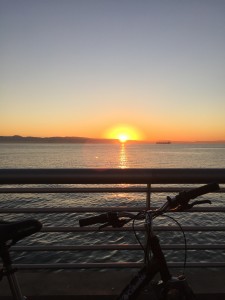 Sunrise on a morning bike ride, looking at the SF Bay.