I’m up early and getting ready to attend my first day at the San Francisco Gift Show.  My 3rd gift show in a little over a month.  Wow!  I’m much more realistic about what to expect in a gift show (not necessarily getting hundreds of orders!) but I still am hoping for more orders than I received in LA (where I received more than I had from Denver).

I picked up my Holiday cards from the printer on Thursday.  I did not print them in my initial print run but we did include them in the catalog.  I also received 2 orders for Holiday cards (though not to be shipped till October) at the LA Gift Show.  I’ll attach a photo I took with my phone of one of the most commented on Holiday cards in my catalog (probably because it is featured as the largest on the page!)

A great surprise this week was a phone call I received from The Mustard Seed in Omak, WA.  Barb called me to tell me they had been by my booth at the Denver show and picked up my catalog.  She wanted to place an order!  WooHOO!  I told her that I didn’t have her business card because I had spent the day before following up with phone calls from folks who attended the Denver Show.  I was thrilled to take her order for 20 different cards, 1/2 dozens each!!  Yeah!!  It’s true, orders follow after the show as well! 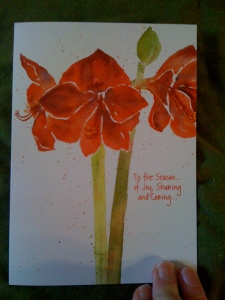