Like the Atlanta gift show held earlier in January, that also last 5 days, it was a loooong 5 days in Vegas the end of January.  The first 3 days passed quickly as many folks were walking the aisles.  I shared a 20′ x 10′ booth with two other artists/card mfgs. Susan Schmitt has a lovely line that reflects her love of “women I have known” as well as florals.  Look at it here: http://www.susanschmittart.com.  Her dolls and cards of women reflect the aunts, mothers and elder women all of us have known in various stages of our lives.  They all hold wisdom that they willingly share through the characters Susan has created and birthed in the cards and dolls she creates.  Rondi Lightmark is the other genius I was lucky enough to share space with in the booth.  Her company, Lightmark Press, reflects her love of dogs in cars and cats that go along for the ride.  Check out her work here: http://www.lightmarkpress.com/Dog_Cat_Art/Home.html.  She captures the soul of the dogs and cats she photographs and then “listens” for the words that she pairs with the photos.

I was blessed to share space with both.  We odd three came about as a result of all having the same rep in Colorado (Christine Carroll Ogden on Facebook).  I’m now rep’d by others but Rondi and Sharon still work with Christine.  Lucky for all of us that we came together as we look bigger as a unit than individuals.  Not to mention Rondi’s large dog in truck photo pulled in a number of people to the booth!  Who can resist heart warming photos of dogs and cats and Rondi had lots of them!  That plus my colorful wrapping paper and Susan’s Dolls and are unique sensibilities brought many retailers to our booth.  We wrote orders and enjoyed conversations with retailers though out the USA.  We all agree that the Vegas show is growing in leaps and bounds.  It’s easy to get here, cheap to stay, and the temps in January are far more enjoyable than 90% of the country!  We even committed to returning in the summer of 2014.

Oh, and best part of all…my daughter flew in to play with me for a few days!  Emily is a buyer at NW Art and Frame, a lovely Art and Gift store in West Seattle (where she grew up and stayed when I moved to SF 5 years ago).  Because we don’t get to see each other all that often (though we talk and text a lot!) it was so fun to have her hang with me at the show.  Plus, as a buyer, she was able to visit some showrooms and write some orders herself for the store.  It was a win/win…plus we tried to win at slots but not so lucky!

Check out the pics and feel free to contact any of us for more information on our respective lines!

Now I hope to get back to doing some watercolors!  January has passed in a blur and I’ve hardly sketched, not to mention played with my paints!! 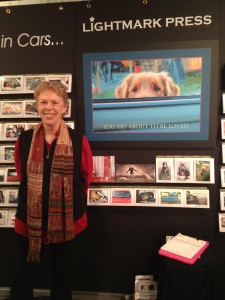